Menstrual cramps are a common and very normal condition, especially in adolescence or before having a child. The most important effect is genetic; the tendency runs in families. The actual process has to do with production of local hormones called Prostaglandins which cause uterine muscle to push the lining of the uterus out during the period.

In a normal menstrual cycle, blood-filled tissue builds up on the inside lining of the uterus. Each day a little more is added. When the period starts, prostaglandins come into action to expel the tissue (called “endometrium”). This results in menstrual bleeding and even clots. Once it is all expelled, the cycle starts over again.

When girls first start their periods, it is common for this to be a painful process. A doubling-over cramp happens, usually relieved by putting a hot water bottle on the lower abdomen. It is common for girls to miss school for a day or two every month to deal with this. This stage is called “primary dysmenorrhea”.

As time goes on, hormones settle down a bit, so pains are not so great. Still, the biggest improvement happens after having the first child because the uterus is stretched out and more efficient, plus hormones are even more settled.

For primary dysmenorrhea, non-steroidal anti-inflammatory drugs (NSAIDs) like aspirin, paracetimol, acetaminophen, and ibuprofen are pretty effective. There are also some natural things that can be taken: Vitamin E, Vitamin B1 (Niacin), omega-3 fatty acids, and calcium/magnesium all seem to help. Herbs that can help include Willow Bark extract (Salix cortex), from which aspirin was originally made, (60 mg salicin 4 times daily). Another is Cramp Bark (Viburnum opulus) and Black Haw (Viburnum pannifolium), given as 2-3 cc of a 1:3 tincture every 2 hours. [Caution: this contains oxalates, which can aggravate a tendency to kidney stones in people known to have them]. [Kenneth Pelletier MD, New Medicine, DK Publishers, 2005]

An eRemedy properly chosen by our expert system at https://eremedyonline.com/module/19/menstrual-pain/ usually reliefs such pains within minutes to hours.

“Secondary dysmenorrhea” occurs later in life and can cause considerable difficulties in certain women. The biggest issue is endometriosis, which can cause very severe cramps and even diarrhea and vomiting. Here is a Wikipedia view of normal female anatomy internally:

Occasionally, the lining of the uterus (“endometrium”) is not just expelled through the vagina; fragments can go the other direction, out through the Fallopian tubes and then scattering throughout the pelvis. They are like seedlings lining the pelvis, attaching to ovaries, and even connecting to intestines themselves. 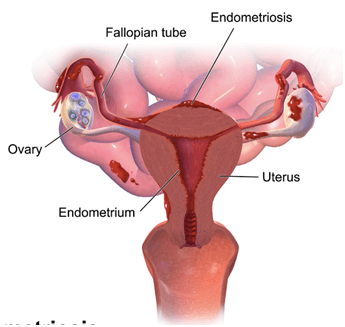 When prostaglandins are activated with each period after this endometriosis-causing event, the small seedlings react with inflammation wherever they are scattered. If they are on the ovaries, pain in ovarian regions occur. If attached to the intestines, the pain can be appendicitis-like. The pains do subside at the end of the period, but can be crippling during the period. [https://en.wikipedia.org/wiki/Dysmenorrhea]

Relief mentioned under “primary dysmenorrhea” have little effect in this situation. Often strong narcotics are the only medications that have any effect, and their effect is limited.

This is a situation where eRemedies from https://eremedyonline.com/module/19/menstrual-pain/ can be rapidly helpful. Because the tissues are seeded, it is unlikely that the seedlings themselves will disappear. But the degree of inflammation can be reduced considerably.

Standard medical treatment usually focuses on giving contraceptive pills to control hormonal responses. Of course, there sometimes are other side effects with this approach. Surgery is another option. Usually this entails a small incision, inserting a small tube internally and moving it around to find the seedlings, then burning them off. This does have a good chance of helping.