Earaches are extremely common in children when the tubes to the ears [“Eustachian tubes”] are small, and the immune system is still learning to defend against various viruses and bacteria. They are very normal and only rarely lead to complications. Even hearing loss is rare in childhood ear infections, though it happens temporarily during the acute infection.

To understand the process, we need to start with internal anatomy: 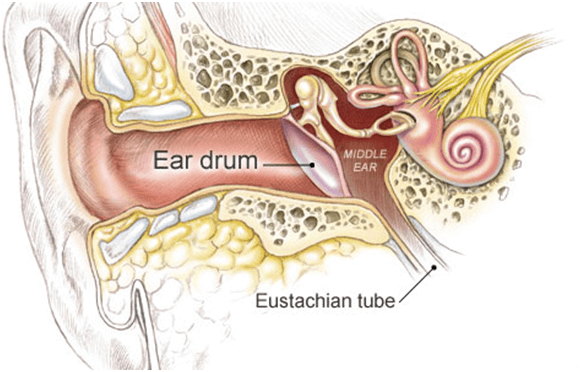 The Eustachian tube connects to the throat, so when there is a sore throat or an allergy affecting the throat, the tiny tubes in little ones can close off. A negative pressure then develops within the middle ear [often incorrectly called the “inner ear”]. This negative pressure then draws fluid from surrounding tissue to fill the middle ear. As a result the ear drum can because red and may bulge out. During this phase, there may be pain and also fever. The ear feels stopped up, and hearing can be compromised.

In small children, the frequency of ear infections correlate directly with daycare attendance, and can be made worse by cigarette smoke in the environment. There are some studies that suggest that 12 months or so of breast feeding tends to reduce the incidence of ear infections.

In daycare, kids pass around all kinds of viruses and bacteria. Most ear infections are likely viral, but known bacteria that are implicated include Streptococcus pneumonia, Hemophilus influenza, and Moraxella catarrhalis.

Kids in daycare get colds, fevers, and even ear infections twice a month for the first year, and once a month in the second year. This is problematic for parents trying to maintain work schedules, but it is good for the immune system of the child. These same children end up missing less school when they get to grade school because their immune systems are adept at defending against a variety of viruses and bacteria.

Therefore, the general recommendation is to not treat ear infections with antibiotics because antibiotics double the time to recovery and triple the number of subsequent infections!

An important corollary point is that the best strategy is to not bring down the fever. Fever is the body’s most effective strategy to eliminate the virus or bacteria – an evolutionary advantage found in all mammals. Lowering the infection delays recovery and increases the chance of secondary complications.

So what to do when the child is screaming in pain from the bulging ear drum? There is a very simple answer. Take any kind of oil and heat it to body temperature like you would a baby bottle – put the vial in water on the stove, then test a drop by putting it on your wrist, where you should not feel it when the temperature matches body temperature. Then put a drop or two of the oil in your child’s ear. The warmth should instantly relieve the pain.

It is important to make sure the temperature is at body temperature, otherwise the drops will cause vertigo and nausea in your child. Also, this procedure is not appropriate if there is pus, blood, or serum flowing out of the ear. A ruptured drum leaves a hole that would allow oil to get into the middle ear and cause irritation; of course, if the ear drum has ruptured, the pain would be gone already.

For rapid relief of ear infections, eremedyonline.com/module/9/earache/ offers eRemedies that are individualized by an expert system based on answers to a simple set of questions. Signals are then played directly on your cellphone or  computer without necessity to go to a pharmacy or medical facility.

Lets talk about the ruptured drum. Many parents, and nowadays even many doctors, view a ruptured drum as an adverse event. Actually, the opposite is true. The ear drum has a pie-shaped area that is thinner than the rest of the ear drum. It is designed to rupture when the pressure inside gets too great, like a safety valve. 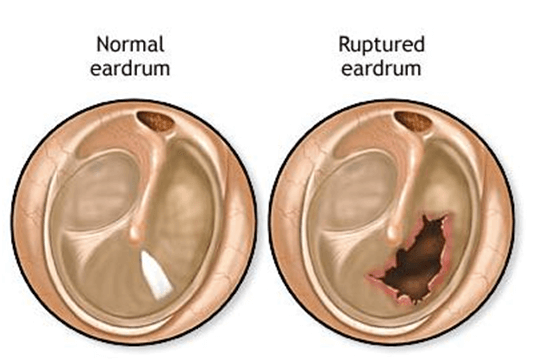 Once the ear drum ruptures, pain and fever rapidly disappear. So pus and/or blood is normal and represents the end of the infection in the vast majority of cases.

In the vast majority of cases, everything resolves after the ear infection ends. However, occasionally fluid in the middle ear remains even after the infection ends. This is called “serous otitis media” or in some circles “glue ear.” This can last two weeks or more. And it becomes a problem if it lasts over three months.

Even serous otitis can be treated successfully by eRemedies at eremedyonline.com/module/9/earache/.

A concern for parents and doctors is hearing loss that can occur in some cases. Using antibiotics creates more frequent ear infections, which can lead to serous otitis with chronic fluid behind the drum and hearing loss. So the idea is to insert tubes to drain the fluid in hope of draining the fluid.

Studies have been done on hearing loss rates at various stages in this process. During most acute ear infections, there oftenis temporary hearing loss which resolves after the infection is over.

The next highest incidence of hearing loss does indeed occur after development of serous otitis media.

Unfortunately, the highest incidence of hearing loss occurs after implantation of tubes. This results from the scar tissue and is therefore a lasting effect.

Thus, the choice of what to do is indeed difficult in this situation.

Fortunately, there are alternatives. Seeing a good Classical Homeopath is a preferred choice for treating this chronic condition. eRemedies alone are not likely to work because they are useful only for acute conditions.

Aggressive and deliberate use of decongestants are another option to try. Decongestants open up the Eustachian tubes so fluid can drain directly into the throat.

A very rare complication can happen if an ear infection goes deep enough to create complications is something called “mastoiditis.” This might happen in countries where the child is malnourished and is unable to conquer the infection.

The “mastoid” is the bony prominence behind the ear. It is filled with air spaces.

If the ear infection spreads outside the middle ear, it can spread to this region. There will be tenderness on touching the prominence behind the ear. There usually is fever and great weakness.

For acute mastoiditis, an eRemedy from eremedyonline.com/module/9/earache/ can produce rapid relief. If this fails, though, antibiotics are indicated because this is an enclosed infection that can damage bony tissue.