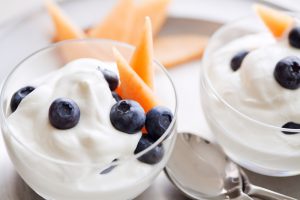 Yogurt has plenty of probiotics!

Natural medicine circles have seen a recent spate of advertising and articles promoting probiotics. Simultaneously there are controversies over effectiveness of probiotic products.

What are probiotics anyway? Intestinal bacteria compromise hundreds, even thousands of species of bacteria, usually healthful but sometimes disease-promoting. We characterize bacteria by their appearance, how they stain for microscopic viewing, and on which types of nutrients they need. These are somewhat artificial categories based on scientists’ need to define such things. Bacteria do live in their own tribes, but they are extremely promiscuous and prolific. They share bacterial viruses, transfer gene-carrying DNA, consume nutrients, produce various gases, and secrete chemicals that act like hormones in the body. Thus, gut bacteria are extremely chaotic, changing, and unpredictable.

Common strains of Lactobacilli and Bifidobacteria, Saccharomyces, even Yeast, and many others coexist in the gut. These healthy bacteria promote healthy digestion, intestinal functioning, and even more general beneficial effects on the body. We call these probiotics. When an imbalance occurs from improper diet, emotional stress, antibiotics, or acid-blocking drugs, pathogenic bacteria grow up and can cause intestinal dysfunction and generalized disease.

Part of the reason bacterial balance can be easily upset is that bacteria double in number every 20 minutes. As you know from high school math, this is an exponential growth rate. Relatively small numbers of bacteria ingested in the evening can have a huge effect within just 8 hours!

Probiotic supplements are widely touted, and usually relatively expensive. 20 years ago this was a major scam that never got much media attention for some reason. When Consumerlab.com, an independent testing laboratory, took samples off retail shelves and cultured them, almost 75% were dead bacteria, contained no bacteria, or had phony bacterial names on the labels. This was possible because FDA has no authority in the realm of supplements. In recent years, I have heard less about this scam, so perhaps the industry has regulated itself better. Even so, it is wise to check the brand you prefer at …

Another controversy occurred in recent years when the FTC (Federal Trade Commission, which regulates truth in advertising) sanctioned Activia, Dannon, and Nestle’s for advertising health benefits that were not proven given that the numbers of bacteria in their products were very small. Of course, small numbers are fine for the reason mentioned earlier — bacteria double exponentially every 20 minutes! The mistake made by these companies centered around how they advertised, not around their actual benefits!

All the hype promoting probiotic products is overblown! You can get get adequate amounts of probiotics simply by eating yogurt or drinking kefir. Home-made yogurt is best, of course, because it is full amounts of bacteria that ferments milk into yogurt! Nevertheless, even pasteurized yogurt is fine. Pasteurization is a process that goes a very long way toward eliminating milk-transmitted Salmonellosis, tuberculosis, and other scourges. Pasteurization. aims to kill 99.999% of bacteria, but it is not sterilization. Some bacteria survive and are able to grow exponentially. So consuming yogurt or kefir at least once a day is a good idea! …. and it is much cheaper!

What are the Benefits?

The most dramatic benefit occurs when you eat yogurt or drink kefir after taking antibiotics. Antibiotics indiscriminately kill “good”and “bad” bacteria, leading to an imbalance that causes diarrhea, constipation, colicky pains, gas, and other problems. By taking yogurt regularly after antibiotics, bacterial balance is re-established.

Some research validates benefit in eczema. Claims occur for benefits in allergies and colds. Similarly, some autoimmune diseases can occasionally be helped a bit.

An extremely common problem in women is vaginitis, and the most common form of it is yeast vaginitis. This occurs when the pH (acid-base balance) of the vagina turns alkaline whether for dietary or stress reasons. Yeast lives optimally at alkaline pH. Doctors frequently prescribe medication to kill the yeast but without changing the pH. Of course the yeast just grows right back! The best treatment is to simply insert a fingertip of yogurt high up in the vagina. The Lactobacilli grow on vaginal sugars and produce acid.  After that, yeast can no longer grow! … By the way, Trichomonas vaginitis does not respond to this approach, so medication might be needed instead of yogurt.

[Don’t forget! If you have an acute ailment, you can use MDinyourHand modules to treat them DIRECTLY via cellphone! Suppose you get flu or fever or an acute headache! These can be relieved rapidly simply by going to the module, answering some questions, and then playing the expert-system-chosen MP3 eRemedy directly on your cellphone!]