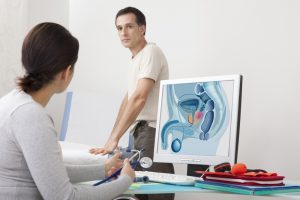 Is PSA helpful or harmful in diagnosing prostate cancer?

Middle-age or older men and their doctors frequently face one of the most common dilemmas in practice. 50% of men above the age of 55 do experience enlargement of the prostate gland, which impairs urination somewhat. This is called Benign Prostatic Hypertrophy and is inconvenient but not danger.

On the other hand, prostate cancer is more of a concern if symptoms develop rapidly or a physician detects a mass on digital rectal exam. The vast majority of these are non-aggressive cancer which just sit there and pose no threat. However, a few percent are aggressive cancer which can be fatal! How to tell the difference?

Previously, a PSA test was the measure: it was thought that a high number — or a rising trend — represented a cancer risk. Prostate-Specific Antigen (PSA) measures a protein produced by prostate cells. It is known to be high in prostatitis (prostate inflammation) which is not related to cancer.

Next, a doctor does a digital rectal exam (DRE), inserting a gloved finger into the rectum just behind the prostate gland, and tries to detect a hard mass in the softer gland. If this is found or the PSA is high, the next procedure would be to do biopsies in one or more sites. The biopsy is graded under a microscope according to its degree of organized or disorganized tissue structure. A Gleason score of 6 or less shows grades of still structured cells, whereas a score of 7 or more up to 10 shows increased disorganization of tissue and cancer cells with increasing cell-division and invasiveness.

If warranted, chemotherapy with testosterone-blocking drugs, radiation, both, or even radical surgery. This depends on adjacent spread to other tissues or lymph nodes.

For many years, medical organizations have been concerned about whether the PSA test is a proper screening test. Screening tests in general aim to discover cancer at an early stage. Unfortunately, a vague screening test also discovers false positives. This leads to unnecessary treatment with attendant side effects and even deaths.

To resolve the controversy, Cochrane for Clinicians in 2011 did a thorough study of six major official databases including 341,351 men aged 50-74 plus many many journals.They concluded that PSA does not significantly reduce prostate cancer outcomes. Moreover, false positives increase over-diagnosis, over-treatment, and treatment-associated morbidity (death).

Obviously a more specific test, especially for detecting only the aggressive form of cancer, is needed!

Nothing definitive has been developed yet to the satisfaction of the FDA or NIH. However, Cleveland Clinic has presented a promising approach at the American Urological Association in May 2016. They have identified changes in the molecular structure of the PSA molecule which do correlate clinically to patients with aggressive cancer vs. those with benign or nonexistent cancer. So far, 132 patients have been studied, so results are preliminary rather than definitive. But hope remains!

There are some attempts to use a different scoring system to improve specificity.

Progensa measures urinary Prostate Cancer Antigen (PCA3) following a digital rectal exam (DRE). The idea is that there is a protein that is only on cancer cells which can be dislodged by pressing on the prostate digitally from the rectum, and then detecting the antigen in a subsequent urine sample.

Similarly, there is a test that detects gene changes called TMPRSS2:ERG detected in a urine sample following a digital rectal exam.

For the vast majority of men with symptoms of prostate enlargement in middle age, being examined is appropriate. At present, digital rectal exam is more reliable than PSA testing. So watch and wait with followup exams is very appropriate. If something is detected on exam, biopsy is still the next step. Sure, this is not comfortable, but aggressive forms of prostate cancer are still a common cause of death. It should not be ignored as a possibility.

Though not useful for chronic conditions such as prostate cancer or hypertrophy, you can use eremedyonline.com to get rapid relief from acute conditions such as influenza, fever, cough, bladder infections, pet bladder infection, and even injury, back pain, childbirth complications, malaria, typhoid, or cholera (such as is now prominent in Haiti!). Just answer some individualizing questions, then play the customized MP3 eRemedy on your digital device, whether cellphone, laptop, or computer! Relief usually comes within minutes or a few hours…..And don’t forget to share with others!

One response to “PSA in possible Prostate Cancer: Helpful or Harmful?”